When we talk about teaching financial literacy to children, it sometimes seems as though teenagers are left out of the equation. That’s unfortunate, especially because the teenage years are when children are starting to become adults. It’s only a matter of time before they leave the proverbial nest and have to start making their own financial decisions.

If you’re the parent of a teenager, this can seem scary, especially if you feel like you haven’t taught them enough about finances. However, there are some ways you can teach your teenager financial skills that are effective and engaging.

Sit down with your teenager and explain why you picked the financial institution you did. Be sure to discuss reasons like service, location and interest rates with them, and at the end let them make their own decision. (You might also want to point out the differences between banks and credit unions while you’re at it.)

Step 2: Put Teens in Charge of Their Own Expenses

As children get older, they start to discover all the things that money can buy outside of toys, like smartphone apps, cool clothes, sporting equipment, books and board games—and that doesn’t even cover the money they’ll need for gas and food if they want to hang out with their friends.

Instead of buying these items for your teenager, a better way is to give them some money a few times a year that they can use however they want. You can tie this into their allowance if you’d like. However, you have to let them know that they are responsible for making this money last until the next “payday.”

This step can be incredibly effective, and it can teach your teenager more about having to budget their money than any example or lecture. You might even take this one step further and have a monthly chat with your teenager about how they feel about the money they’re getting. You can help them come up with hacks on making their money go further, and if they make a convincing argument why they should get more money, like they have to drive their younger siblings around more often, you might even increase the amount of money they get.

Even if they’re working a part-time job at minimum wage, there’s a good chance they’ll have well over $100 saved up, plus interest. That’s quite a bit of extra money for a teenager, and it’s a good incentive to save more.

For many teenagers, college is looming in their future. That means they’ll need to think about loans, which can make anyone feel anxious.

Now is the time to sit down with your teenager and talk about good debt versus bad debt, or debt that will improve your net worth versus debt that ultimately hurts your financial situation. You can explain why student loans are good debt, and even help your teenager through the bureaucratic hoops of applying for student loans and giving them a sense of the best ways to pay the loans back.

Step 6: Get Your Teen a Credit Card

This is by far the most controversial suggestion on this list, but it can also be the most effective. Teenagers are bombarded with credit card offers almost from the day they turn 18, and many teenagers get themselves into serious debt because they don’t know how to use credit cards.

You can get your teenager started on the right path by giving them a debit card to their account. If they’ve figured out how to use that responsibly, the next step is to get your teen a secured credit card, or in other words a credit card with a credit limit they’ve already paid for. 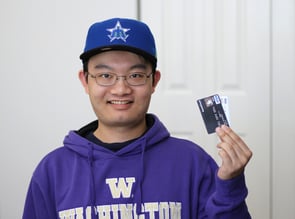 If you really trust your teenager, though, or they might need to spend money while running errands for you, you can also get them their own credit card tied to your account. If you do this, you should explain to them what a huge responsibility having a credit card can be, as well as strict guidelines about what the card can and can’t be used to do. You might also put limits on spending using a feature like First Alliance’s My Cards to make sure your teenager can only spend set amounts of money at certain stores or for certain categories.

Teenagers are starting to make the shift to becoming autonomous. Help them started out on the right foot by giving them guided experience with finances before they leave home.

You can also give your teenager valuable tools for financial success when you help them become a member at First Alliance Credit Union today. They only need $5 to become a member and get a Teen account that comes complete with online banking and a same day debit card. They also get access to our mobile banking app, which offers free mobile check deposits and the can send money with Zelle.